I moved back to Perth in 2010, having grown up here, gone to school, University and started my career here. It’s a lovely city, with the metropolitan area sprawling north and south along the blueÂ Indian Ocean for some 50+kms. They says it’s a bit of a Mediterranean climate, normally never going below 0Â°C, and the heat of summer hitting mid 40Â°C, but with a fresh westerly coastal breeze appearing most afternoons to cool the place down.

So one thing those in technology are well aware of is latency. Even with fibre to theÂ premises (NBN in Australia), the Round Trip Time to Sydney is around 55ms – which is a similar time to Singapore. Melbourne comes in around 45ms. 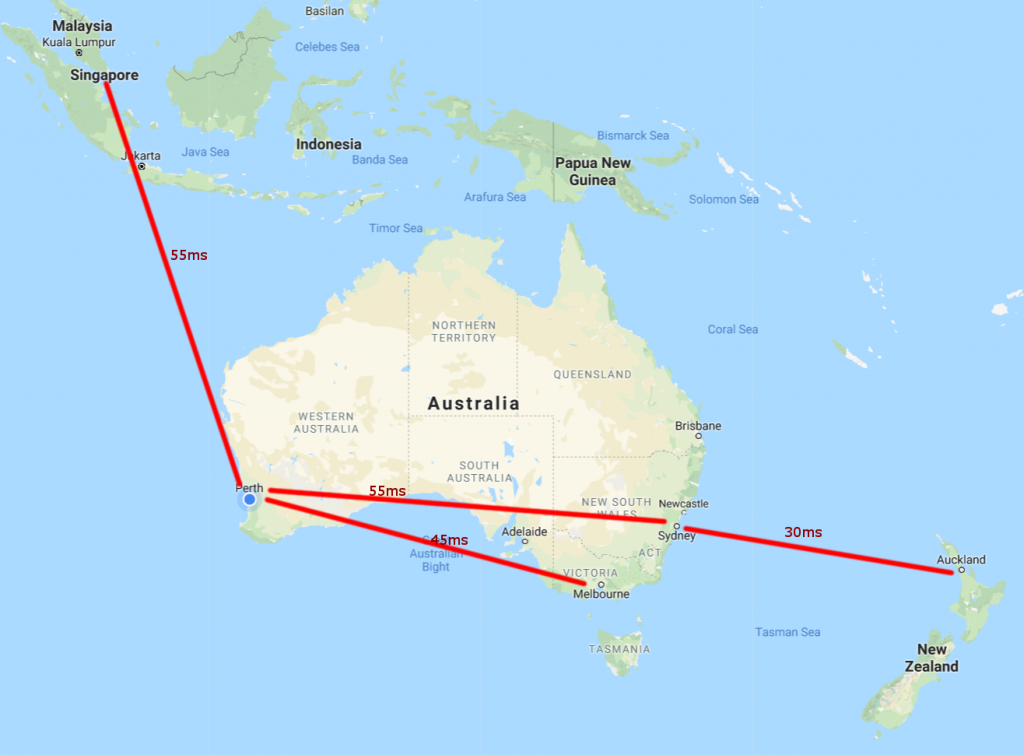 In 2013 I met with theÂ AWS CloudFront team in Seattle, and wasÂ indicating the distances and population size (circa 2 million) in Perth. There’s a lot of metrics that goes in to selecting roll-out locations (Points of Presence) for caching services,Â with latency, population size, economic prosperity, cost of doing business, customer demand from a direct customer model, and customer demand from an end-consumer model being weighed up.

This impact on this is that all web sites that people of Perth that use CloudFront will now appear to be faster for cachable content. The latency has dropped from the 45ms (to Melbourne) to around 3ms to 5ms (from a residential NBN FTTP @ 50 Mbit/sec).

In addition, the ability to upload/send data to applications (Transfer Acceleration) on-Region via the Edge (Edge Upload) may now also make a difference; with 45 ms to Melbourne, its been a largely unused feature as the acceleration hadn’t made much of a difference. There is a Transfer Acceleration test tool that shows what effect this will give you; and right now, while it shows an advantage to Singapore, just a 7% increase in performance to the AWS Sydney Region. Its not clear if TA via the Perth PoP is enabled at this point, so prehaps this will change the result over time.

And so, after several years, and with other improvements like the ability to restrict HTTPS traffic to TLS 1.2, it now makes sense to me to use CloudFront for my personal blog. In an hour, I had applied a new (additional) hostname against my origin server (a Linux box running WordPress) by editing the Apache config, symlinking the wordpress config file, and adding a Route53 CNAME for the host. I had certbot on Linux then add the new name to the Let’s Encrypt certificate on the origin. Next I applied for an Amazon Certificate Manager SSL certificate, with the hostname blog, and (if you inspect it) blog-cloudfront.james.rcpt.to. I then created a Cloudfront Distribution, with one origin, but two behaviours – one for the WordPress admin path, and one for the default paths, so that I could apply additional rules to protect the administration interface.

With this in place I could then update the DNS CNAME to move traffic to CloudFront, without any downtime. Not that downtime matters on my personal blog, but doing exercises like this you need to practice.

PS: It’s worth noting that IPv4 DNS resolution for my CloudFront distribiution is giving me 4ms RTT from Perth, but IPv6 RTT is 52ms, which indicates that IPv6 CloudFront has not yet arrived here.

I wrote last year about sitting AWSÂ Certifications in Perth. I’ve done another two AWS Certifications in the last month (Networking Specialty, and CloudÂ Practitioner), and a few things have changed. Gone is Kryterion as the assessment provider, and in has come PSI; this means new venues- and there’s now only one in PerthÂ at 100 Havelock St, West Perth.

It’s aÂ new-ish buildingÂ I know well; an old friend wasÂ working on the top floor for a while, and I spoke to his teams about AWS several times (they became and AWS reference customer). Small Italian-inspired coffee shop on the ground floor (more on this later).

The booking process for exams is much the same, but now via https://aws.training/ (funky new DNS TLD). The certifications with PSI happen via their customer rigged Kiosk systems: a PC with two webcams, one mounted on the monitor facing the candidate, and one positioned on mast protruding above the screen facing the desk (down). With these twoÂ cameras, a remote monitor can view the candidate and the desk at all times to ensure there is noÂ compromise of reference materials; andÂ one person remotely monitoring can theoretically be proctoring multiple students in many locations simultaneously (I suspect they are listening too).

With this customer rig, there are only limited seats â€” in Perth, there are two. And the booking process is scheduling candidates to one of these Kiosks â€” literally called Kiosk 1 and Kiosk 2 â€” are located in a small room on the 1st floor of 100 Havelock St, looked after by the friendly Regus staff.

The exam start time is often 8:30am, and advise on the booking emails recommends turning up 15 minutes before this. By contrast, some non-AWS exams scheduled with PSI on the same Kiosks recommend arriving 30 minutes before hand. But there’s a catch; the doors on the ground floor do not unlock for access untilÂ around 8:25am, and Regus doesn’t often get staffed until 8:30am (Regus checks you in and sets you up at the Kiosk).

Unlike the Kryterion centers, this doesn’t seem to be a big problem â€” previously being just a few minutes late was an issue; so, if you do get there with plenty of time, the aforementioned cafe on the ground floor is open much earlier (there were open at 8:00am they day I got there early).

Photo ID is critical to have with you; a scanner mounted on the Kiosk rig is used to get an image of documents like Passports and Drivers’ Licences. YouÂ should have two forms of photo ID,Â but if you have bank cards or others they can supplement (just cover some of your card numbers for security’s sake). The moderator looking at the camera compares the Photo ID with the image of you sitting there in real time.

The assessment interface itself is then very similar, with the addition of a chat window to communicate with the moderator at any time. Feedback comments can be left on questions. I found one question had assumed that multi-choice answers that did not include the answer that had changed in mid-December (just a few weeks ago)Â so I left a commend for the AWS certification team on this and followed up by my contacts directly.

I’ve had no problem scheduling certifications with a week’s notice, but I envisage that as demand grows, the lead time to book a slot may become an issue until more Kiosks are added (or additional venues). But that’s not an issue right now.

Several years ago saw the introduction of AWS CloudTrail, the ‘almost’ audit log of API calls performed by a customer against an AWS Account. This was a huge security milestone; the ability for the customer to play back what they had asked for.

I say ‘almost’, as a critical design decision was for CloudTrail in no way to inhibit the already authenticated API call that had been made by the customer. If the internal logging mechanism of CloudTrail were to ever fail, it should not stop the API call that was issued. Other logging mechanisms in computing may place logging in the critical path of call execution, and if logging fails, then the API call fails.

With CloudTrail (and the ability to go directly cross-account to from AWS direct to a trusted independent account, came the second task – looking at the data. Its all JSON text, and it has a corresponding chain of check-summed and signed digest files meaning the set of log files cannot be tampered with, and cannot be removed without breaking the chain.

Numerous solutions were put in place, but they were mostly basic individual pattern matches against single lines of logs. If you see X, then alert with a message Y: If there is a Console Login event, and it doesn’t come from XX.YY.ZZ.AA/32, then alert.

In December, AWS introduced a managed service that would use a private copy of the VPC Flow Logs, a private copy of the CloudTrail log, as well as a Route53 query log, and supplement this with some centrally managed, maintained and updated threat lists, mix in some customer defined threat lists and white lists, mix with a bit of machine learning, and produce much richer alerting.

Guard duty currently has not finished yet. At re:Invent, Tom Stickle indicated in a graph that there is a slew of additional capability coming shortly to GuardDuty, and now that it’s GA, more customers will have feedback and input into the future direction of the service.

However, this doesn’t replace the need to have your own, secured and trusted copy of your CloudTrail logs, and your own alerting for events that you think are particularly significant, such as a SAML Identity Provider being updated with a new Metadata document!

But between this, and Amazon Macie (for analysing and helping you review and secure your S3 documents), your visibility of security compliance and issues continues to get even higher.